An Introduction to Automated Tests With Behat PHP

Often when developing web applications you’ll want to setup some automated tests. There are of course lots of well documented ways to setup automated unit, integration and functional tests using tools such as PHPUnit and Codeception. However, like me you may work in a team with a QA (Quality Assurance) and you may wish to empower them to configure some automated tests without having to write or understand too much code.

This is where Behat comes in handy. Behat is a PHP version of the well known testing tool Cucumber and it follows Behaviour Driven Development principles along with the Gherkin syntax. If you’d like to understand more on BDD and Behat I’d suggest you watch Ciaran McNulty’s fantastic talk on the subject.

In a nutshell Behat allows you to write and execute human readable tests. Here is an example of a Behat test…

This is pretty cool, right? It’s even more readable than Codeception. There is of course a catch, which is that you need to write / code the underlying tests which Behat can then execute. These are known as ‘step definitions’ and are grouped into classes known as ‘contexts’.

Under the hood Behat converts the human readable commands into a method name it executes in the context class and then checks whether it passes or fails. An example step definition looks like this…

You can see how the method name thereIsAnIteratorClassWithACountOf tallies with the Behat test above Given there is an iterator class with a count of 0.

As a developer using Behat may seem like overkill, writing tests twice does seem pointless. If you have a QA though they are responsible for testing your product. It therefore makes sense that they write some tests. In addition, they play an important role, along with the Project Manager, ensuring the product matches the client brief. Behat and BDD principles empower a QA to define tests that will ensure your product works as expected and matches your brief.

There are also some cool features built into Behat that allow QAs and developers to work well together. First off when Behat tests are written and run for the first time Behat will output the method signatures that need to be implemented by the developer, as can be seen in this image. 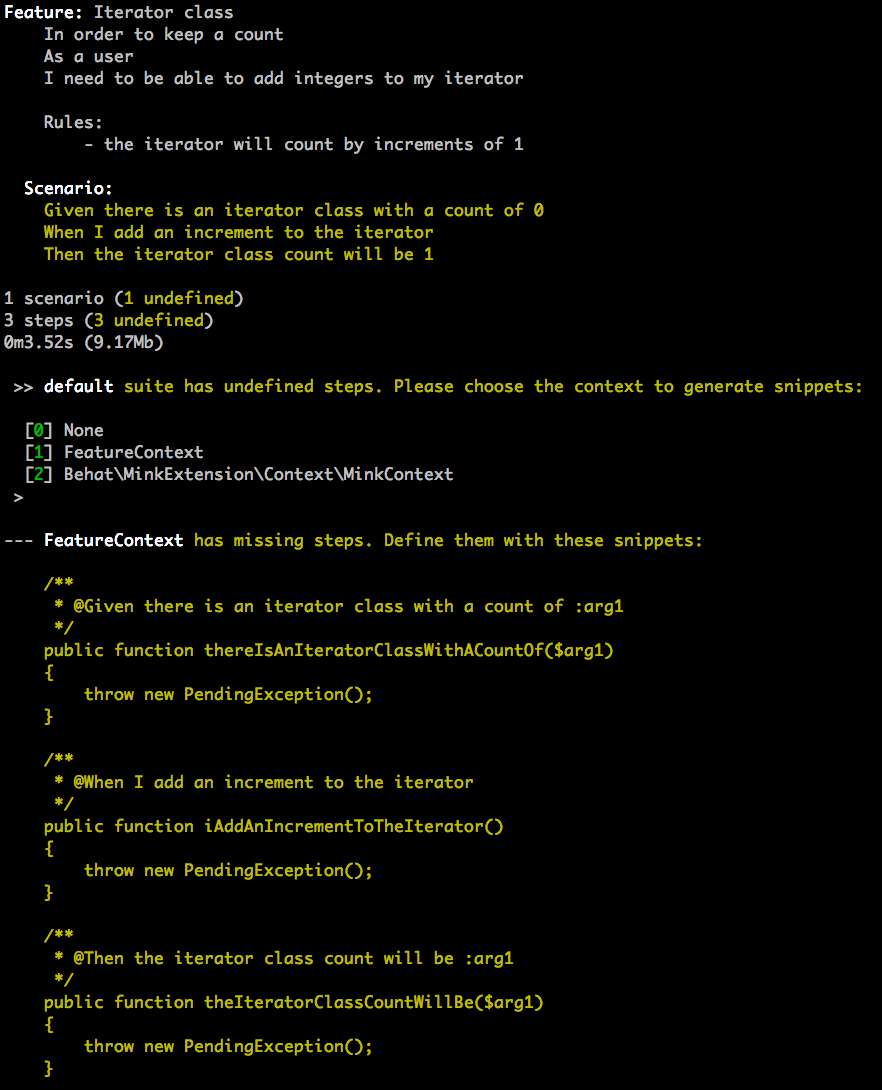 Behat therefore allows your QA, and possibly Project Manager, to focus on defining your tests and specifications, while your developers focus on writing code to pass the test and match the specifications. Working in this manner may impose some up front costs but it will reduce your bug and maintenance costs in the future as your product is better defined and tested. Overall this will benefit your team, your efficiency and your client relationship.

In addition, Behat can be extended with libraries such as Mink and tools such as Selenium so you can run functional tests on the User Interface. Mink also comes with built in contexts, this means a QA can begin writing functional tests without any help from a developer and very little knowledge of code.

In the sister post to this I explain how to setup Behat and Selenium to run automated functional tests of the UI using Chrome on a Linux environment.